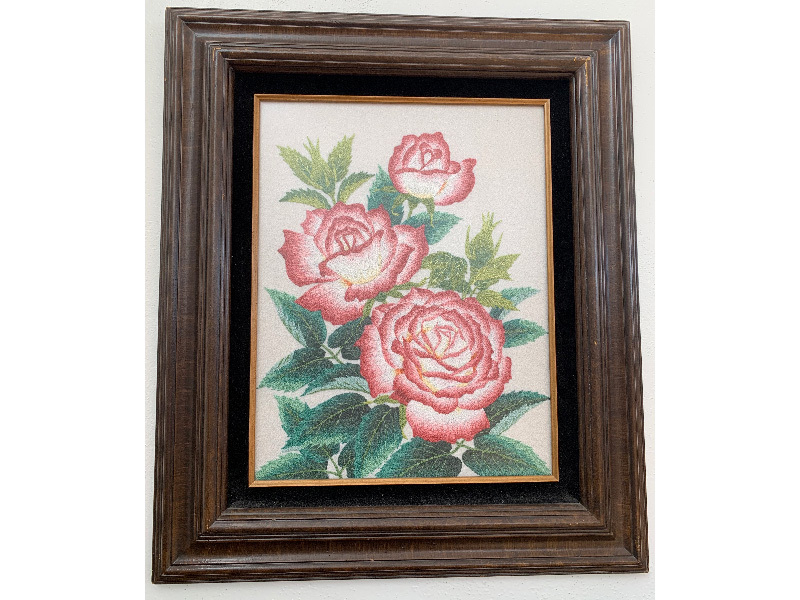 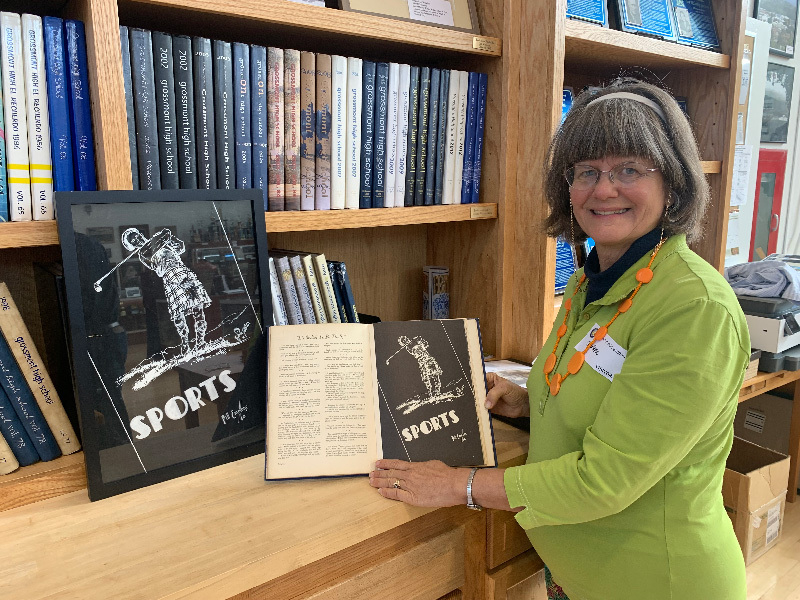 Charlene Craig with Her Father's 1938 Art Work and the Yearbook 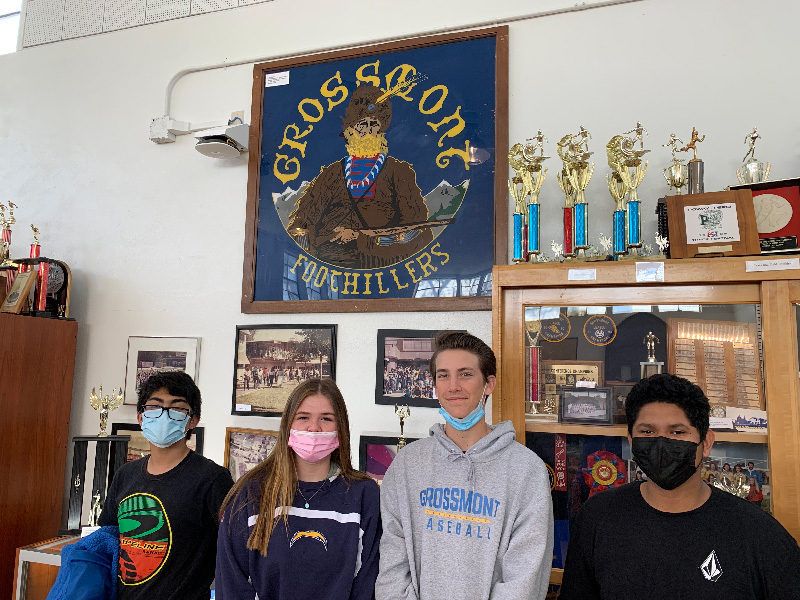 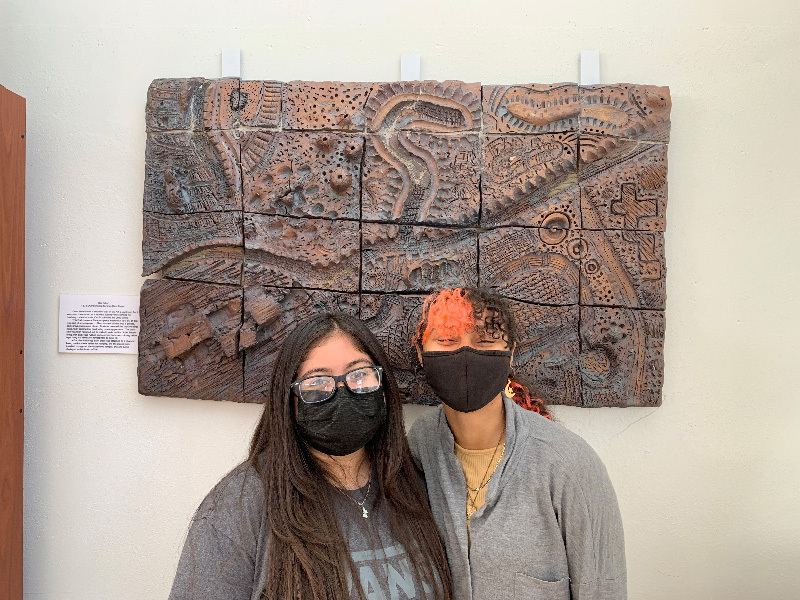 Japanese Bunka Embroidery evolved at the turn of the 20th century after the invention of rayon, which when woven would become a yarn like floss with a soft texture.  This art form involves using a punch needle and is described as “an oil painting of yarn.”

The beauty and color of this piece are striking and a testament to the hours Masako devoted to its creation and her lifetime of creative expression in embroidery, photography, ceramics, and crafts.

Many of the items we have in our archives and on display in the museum have been donated by loving family members.  Charlene Craig, daughter of Bill Emmons, Class of 1940, has donated several items to the museum, many of which showcase Bill’s artistic talent, including an illustrated A Tale of Two Cities and Evangeline book report, as well as wonderful artwork used in the student yearbooks and newspapers.

Bill was a naturally gifted illustrator from a very young age. Charlene lovingly recalls, “One of his GHS art teachers must have written to Walt Disney Studio’s art department on my Dad's behalf sometime around his 1940 graduation to help him realize his high school goal of working for WDP. That summer he was formally invited by mail for a paid 3 month internship at their new Burbank studio in August of 1940.”

On display on the shelves housing 100 years of Foothiller yearbooks is a framed drawing of the sports section title page. The yearbook featured a Scottish theme that year, which Bill captured vividly in black and white.

A teacher’s aide in the Art Department for 6 years, David Nichols then served as a student teacher while earning his teaching credential under Carol Lockwood and Jerry Lewis.

This Environmental Ceramics piece, made with 150 lbs. of clay, was part of a class project.  The class was divided into 6 groups of 5-6 students, each making one piece.

Today, David recalls, “The assignment was to create a 3-D relief using repeating pattern and texture.  We also talked about the idea that an artist can place meaning within, but good art allows the viewer to see what is relevant to them.  While you may see snakes, a duck, acorns, in reality the artists may have been depicting something entirely different.”

Students pounded the clay into large slabs, then sculpted by hand using repeating patterns.  The back side was then hollowed out to make it easier to fire.  After bisque firing, iron oxide was rubbed onto the piece to enrich the brown coloring before high firing in a reduction atmosphere to cone 10.

After the final firing, each piece was attached to a plywood base, brackets were added for hanging, and the pieces were installed throughout the Grossmont campus, this one being displayed in the district office.

Two of the six are known to remain today, one in the museum and one in David’s living room, both testaments to Foothiller artistic expression.

Soon after we began the museum, we were presented with the mystery of “Big Gus”, which originally hung on the walls of the old boys P.E. locker room.  The first mystery was its date, which was solved when we stumbled on “him” on the cover of the 1980-81 Student Handbook;  the second mystery was the artist, which we have yet to solve.

Its vibrant colors and impactful design distinguish it as a powerful representation of Foothiller spirit.  We welcome information about its origins and its artist!

Foothillers have left their footprints on campus in countless ways; these items remind us of how essential art is in the high school curriculum and the many ways it echoes through the decades.

Recently, we learned that the museum’s needed installation of heating and air conditioning as well as the replacement of the windows required a seismic retrofit of the building.  These improvements are not possible in the 1950 Dance Room, where the museum is currently located.  Our new space will be about the same size, but without the historic memories.

Alumni who want to visit the campus as part of their class reunions are welcomed to contact us for a campus tour, which could include our smaller decade displays of the 1920s-present in the school office, the athletic displays in the PE Building, the first athletic team photos in the 1970 New Gym, as well as a peek inside the 1937 Old Gym.  Your tour could also include the district office, where we have a large display upstairs and where a walk on the 1922 hardwood floor in the hallways will rekindle many memories.  Please contact us to confirm a time and a date for your class.

Hours: Wednesdays by appointment or from 10-1 Saturday April 9th or April 23rd.  No appointments during Spring Break April 6th and 13th. For more information or to make an appointment for a Wednesday visit, contact us at or 619-668-6148.