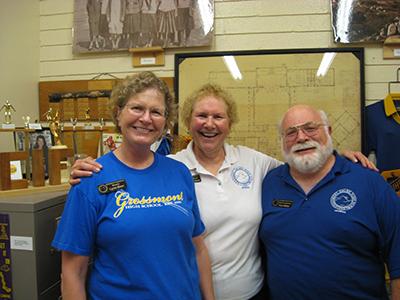 In October 2008, a dream was realized with the Grand Opening of the GHS Museum on the Grossmont campus.  Prior to its opening, Connie Baer, Class of 1965, and Lynn Baer, Class of 1969, spent 18 months, organizing and creating the Museum displays.

During the school year, the ninth grade English classes visit the Museum as part of our efforts to share our wonderful 99-year old history with them. We are open each Wednesday at lunch for the students to explore our amazing traditions.

Open to the public the first Wednesday of each month and by appointment on other Wednesdays, the Museum welcomes alumni and the community to share their memories of Grossmont High, as we discover all that we have in common.

The Museum operates solely on donations, which are used to create the Museum displays, to preserve our memorabilia, and to celebrate Grossmont's history. Listed below are some of our current projects and fundraising needs. We hope to be in our new Museum location in the current 3300 sq. foot dance room, once the new Performing Arts complex is completed in 2020.

To make a tax-deductible financial donation, please use the Pay Pal button on the right. If you would like to sponsor a certain project, please email us at This email address is being protected from spambots. You need JavaScript enabled to view it..  You may also write a check, payable to the GHS Educational Foundation, and mail it to GHS Museum, P.O. Box 1043,La Mesa, CA 91944-1043: in the check memo, please specify your sponsorship of a certain project or specify Museum General Fund.

Sponsorship Opportunities: We need your help!

The GHS Museum and Alumni Association need your support to continue our efforts to celebrate, preserve, and display our remarkable Foothiller history. We are working on our second book: the history of the Christmas Pageant, filled with Foothiller memories and photos. Our thanks to those whose financial donations are making it possible. (Copies of the GHS Instrumental Music 1920-2016 book are still available for $30 plus $10 mailing!) Download the Flyer

As we look ahead to moving into the 3,300 square foot dance room (Rec Room in 1950 Girls PE Building) in 2020, we need your financial donations to fund at least 10 new display cases, wall shelves, and mannequins!

Donations of any amount are welcome. To make a donation, please donate via Pay Pal or write a check payable to GHS Educational Foundation and mail to GHS Museum, P.O. Box 1043, La Mesa, CA 91944.

We know you are as eager as we are for this historic moment in Foothiller history. The celebration will begin with a Friday night football game, followed by a Saturday celebration, including the 2020 Hall of Honor induction ceremony and visits to the original restored 1922 Gray Castle and our expanded Museum in its permanent location.

We welcome donations of any amount to help with the cost of the book, which will be filled with 200 photos and information documenting our amazing history. To receive our 100th anniversary email updates, contact us at This email address is being protected from spambots. You need JavaScript enabled to view it..

September 1920, Grossmont High School opened; however, for its first two years, while the original school, now the district office, was built, students attended school at their temporary home, the old Riverview HS campus in Lakeside.  In September 25, 1922, Foothillers first attended classes in the granite “Castle” that has been an iconic landmark in East County since its completion.

This fall Grossmont will celebrate its 100th Anniversary, part of a yearlong celebration of the traditions of being a Foothiller.

The first date to be circled on your calendar is the GHS vs Sweetwater High School football game on Friday, September 18th.   In 1920, Sweetwater High was the first school that Grossmont played in football, the beginning of a fierce forty-one year rivalry from 1920-1961, which was documented over the years on the perpetual trophy we call the “Bucket Trophy”.  Amazingly, Sweetwater High School is also celebrating its 100th Anniversary in 2020.

During its 100th Anniversary Celebration, Grossmont will induct 12 new members of its Hall of Honor, bringing the total Hall of Honor members to 51, alumni, staff, and community members who distinguished themselves, bringing honor to Grossmont HS.

When notified of their selection to the GHS Hall of Honor, the honorees’ reactions validated its importance.

Jim Zumwalt responded,  “I am humbled to be honored with so many other illustrious graduates.”

Scott Lippman, “Thank you for your kind invitation.  I have very fond memories of Grossmont.”
Anita Garrison Hensley, Great Niece of Eva McCarthy, will accept on behalf of the 3 early Educational Pioneers: Carl Quicksall, Eva McCarthy Quicksall, and Ethel Prosser, a dear friend of theirs.  “Sounds like a wonderful celebration.”

The 100th Anniversary Committee, including both the cities of La Mesa and El Cajon, is currently planning the specific details of the celebratory weekend.  Despite the present coronavirus outbreak, we are hopeful that these events will occur:

We hope to see you next school year for our yearlong celebration as we reflect on the 100 year journey we have taken as a school and as a community.