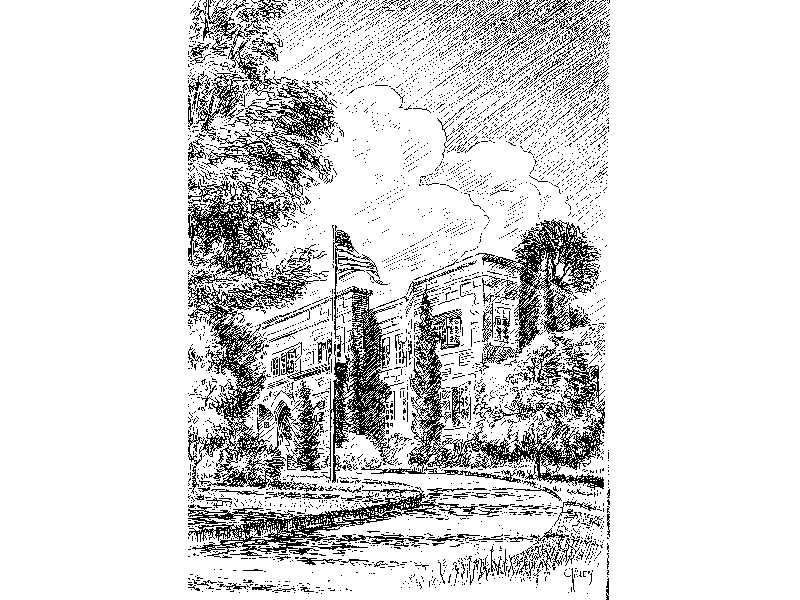 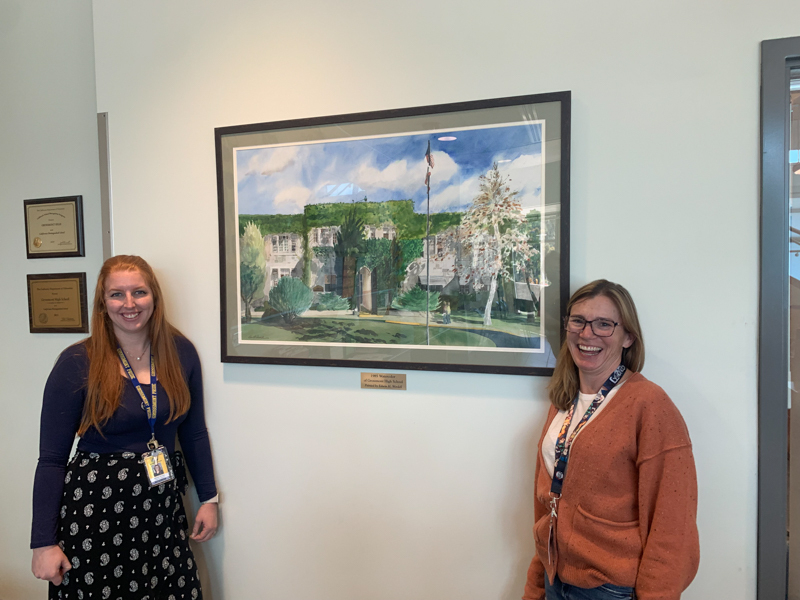 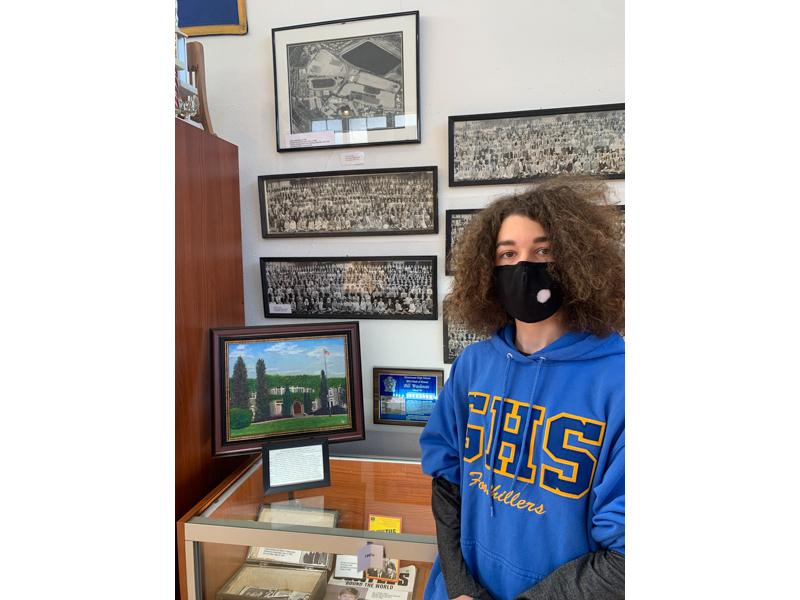 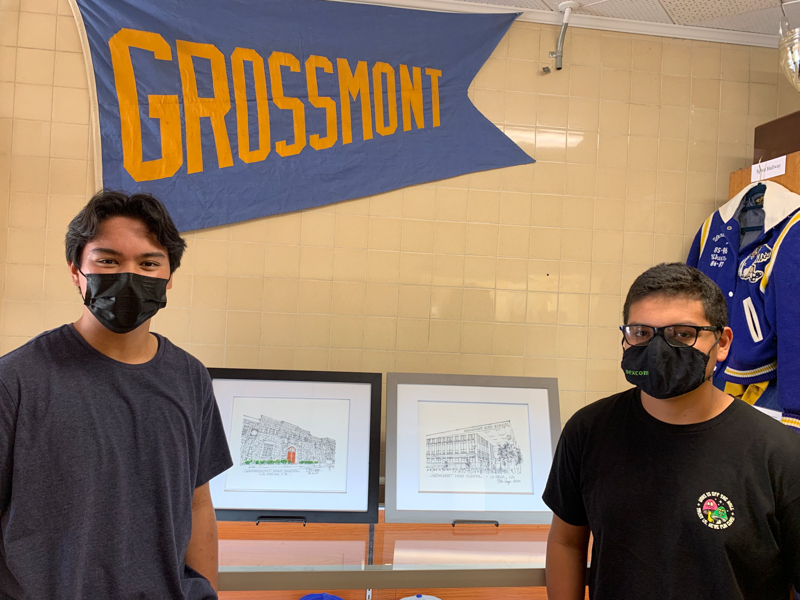 Since its earliest years, Grossmont High School’s original 1922 granite school building has been an ideal model for artists to capture. The granite design, its location on the hill straddling the boundaries of La Mesa and El Cajon, and its proximity to the railroad, now trolley, tracks, have made it an East County landmark, leading many to give directions referring to its presence.

Many of the early drawings were published in the student yearbook.  In the 1942 El Recuerdo, the “Castle” is depicted in a drawing by Clark Allen, Class of 1942, a member of the GHS Hall of Honor.  The drawing captures the dramatic exterior of the iconic building and its timeless nature.  Countless photographs have been taken of students, staff, and alumni standing in front of the building.  Recently, Grossmont High School has received wonderful art work depicting this building in different decades.

In 2016, the GHS Museum was contacted by Cathy Jardell, daughter of Edwin H. Wordell, who shared “My father Edwin H. Wordell was a very well-known watercolor artist in San Diego.  He passed away 3 ½ years ago.  As my brother and I were going through his art a few weeks ago, we discovered a painting he had done in 1985 of Grossmont HS.  It is a beautiful watercolor.  The database we keep says that he painted it as a possible commission painting.  It was kept by Aesthetics Collection for a few years and was in a solo exhibit at the East County Performing Arts Center in 1990.

I would love for the painting to be displayed and enjoyed by others rather than lying in a drawer.  The painting is 26” x 40” and is unframed.  I am willing to donate it to your museum on the condition that it would be framed and hung somewhere on the campus.”
The dramatic framed watercolor painting vividly captures the iconic exterior of the school, as it hangs on the wall of the lobby of the school office, a reminder of decades past.

As a surprise for us and to honor Grossmont’s  100th Anniversary, alumnus Ken Wilson, Class of 1972, asked artist friends to depict the original school.  Before the 101st Anniversary Celebration, Ken presented to the museum a wonderfully rich painting by artist Charles Fromer, Class of 1971.

At Grossmont HS, Charles was a wrestler, active in ASB and Drama, and was cast as the cook in the 1969 and 1970 Christmas Pageants.  After retiring from the Department of Defense, Charles transitioned to being a full-time artist who maintains a studio at the LIbertyTown Arts Workshop in Fredericksburg. Today his painting is an integral part of the museum’s decade displays.

2022 Drawings, GHS Past and Present

The journey of the most recent art work began with a luncheon in Chicago of a group of four Class of 1959 alumni, which commercial illustrator Bob Happ attended.

Alumnus Marti Ballance Guarin shared that during the luncheon, “Bob asked about Grossmont High.  He later looked it up.  Was I amazed when Bob told me his plan to donate his drawings of Grossmont High School then and GHS today in honor of the Class of '59!   It was a wonderful initiative of his.  The drawings are beautiful and evocative.  He also did small versions for each of us.  They so bring back our Grossmont years.”

The drawings were mailed to GUHSD Superintendent Theresa Kemper, who contacted GHS Principal Dan Barnes, with a message from Bob, “Marti and a number of her classmates have fond memories of their Grossmont Union High School days. Marti is providing this gift of original art to the District.”

Superintendent Kemper told Bob and Marti, “I admit I was jealous and had a hard time handing over the Castle artwork!  Bless you all and thank you so much for your love of Grossmont and your generosity.”  Today these drawings greet visitors at the entrance to the GHS Museum.

As these glorious art works testify, Foothillers from the past are an integral part of today’s Grossmont High School culture, reminding us of the timelessness of Foothiller experiences.

To learn more in person, visit the GHS Museum on Wednesdays by appointment or on Saturday, March 19th, from 10-1.  As of February 18th, masks are still required of all visitors to the museum.  For more information, contact us at or 619-668-6148.