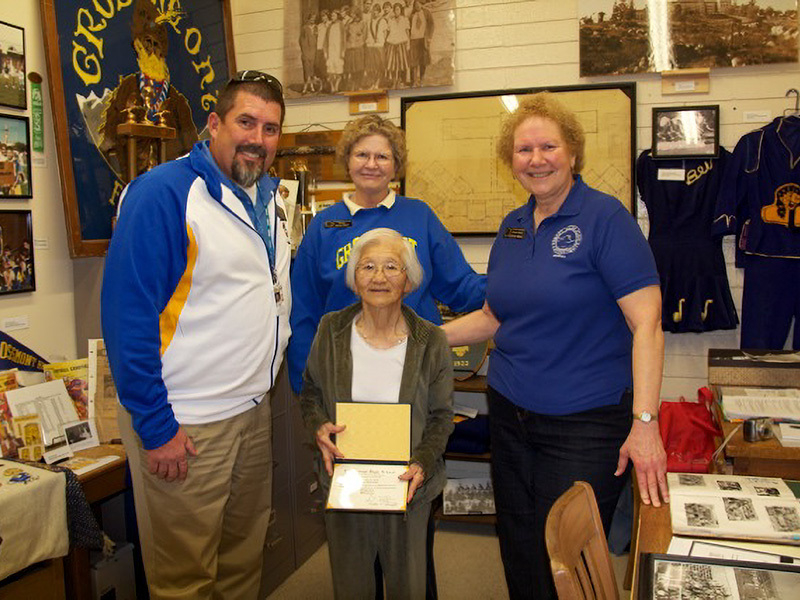 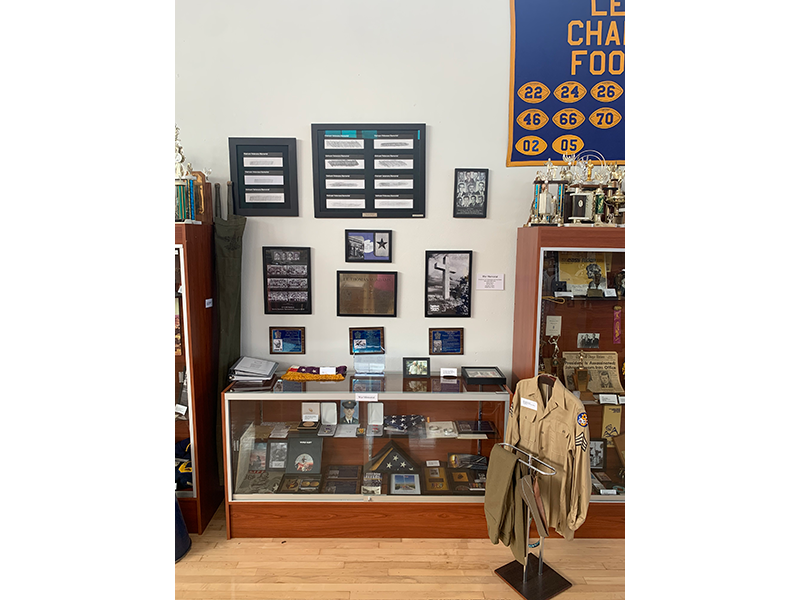 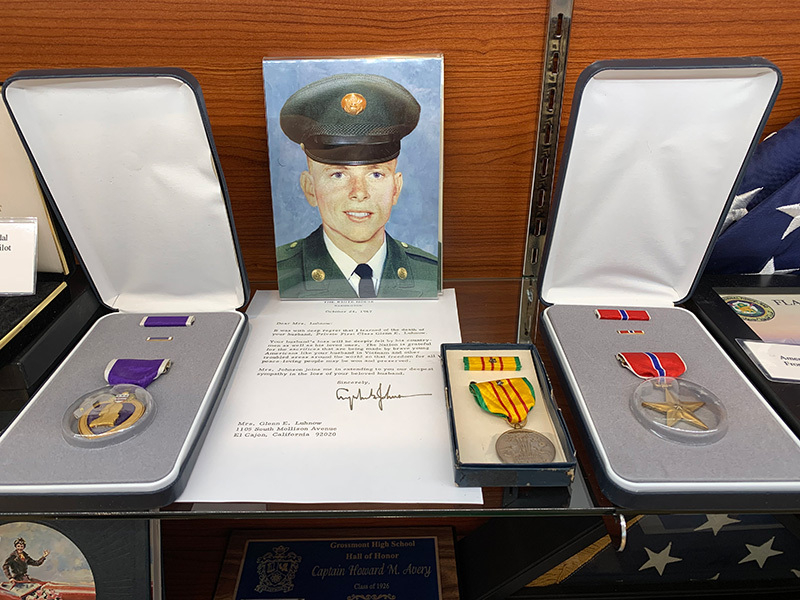 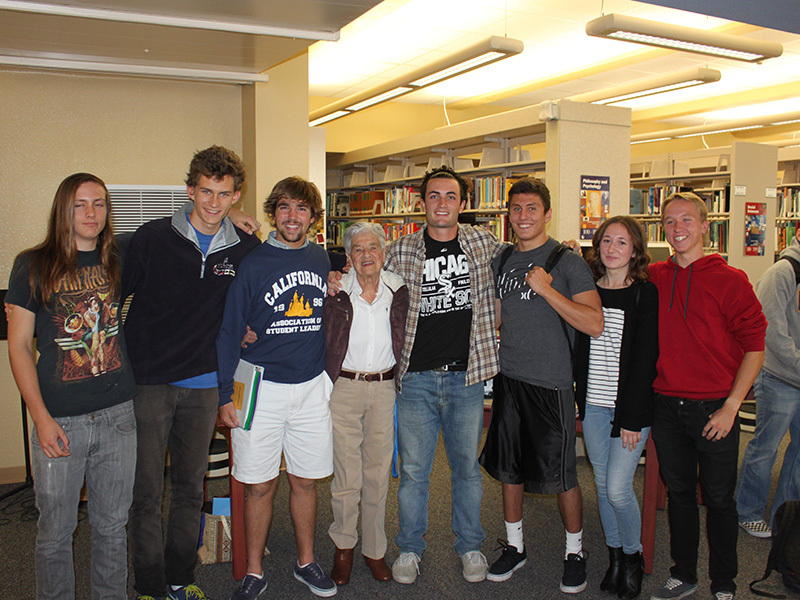 The GHS Museum War Memorial display pays tribute to those who have died in wars as well as those who made a difference or who sacrificed in ways not to be forgotten.  Three of their personal stories offer a vivid glimpse of history.

A collage that honors the 15 students removed from Grossmont in 1942 hangs on the wall above the memorial.  Their stories are testament to the human cost of Executive Order 9066.  In 2011, Grossmont High School received a letter from the niece of Grace Kaminaka Tsuida, who as a sophomore, was one of the 15 sent to an internment camp.

Principal Dan Barnes facilitated Grossmont awarding Grace an honorary 1942 diploma in a special way.  When her husband Mass received the Congressional Gold Medal in Virginia for being a part of the highly decorated 442nd US Army Division of Japanese American soldiers,  Grace’s niece presented the GHS diploma, the 1941 and 1942 yearbooks, and the 1944 commencement program to her at the family celebration.

When the family returned to San Diego, they visited the Museum, sharing their stories with us.  The family was given a two-week notice to leave.  After they reported to the Santa Fe Depot in downtown San Diego, they were taken to the Santa Anita Race Track in Arcadia, CA, to wait weeks before traveling by train to Poston, AZ.  Grace’s family, father, mother, brother, and two sisters, lived together in one small room in which her mom put up sheets for privacy barriers.

Grace’s story is one of many that are captured in reports written by Don Ginn’s AP US History students; their voices are echoes of an unforgivable injustice.  At the age of 96, Grace died peacefully on March 16, 2022 after battling the effects of the COVID virus.

During WWII from 1942-1944, members of WASP became trained pilots who tested aircraft, ferried aircraft across the United States, and trained other pilots to free male pilots for combat roles in the war.   1100 women served in the WASP.  Amazingly, two of them were Foothillers: Frances Coughlin, Class of 1938, and Jean Landis, Class of 1936.  Both of them ferried planes across the United States.

In  2009, the women received the Congressional Gold Medal in honor of their service and sacrifice.  Jean graciously donated her medal and her WASP memorabilia to the GHS Museum, including her 318th WR Silver Wings and the mascot patch designed by Walt Disney Studio taken from her leather jacket.

In 2015, Jean spoke to Don Ginn’s AP US History students of her experiences during the war. “We had to pay for all of our clothing, had no medical or insurance or many other military benefits…we received less money than men doing the same job.  But we were there to fly and loved every minute of it.”  Afterwards, several students told her how inspired they were by her.  That day and since then, Jean, now 103, has touched everyone she met with her remarkable story and her wonderful enthusiasm for life!

This year, the 40th Anniversary of the Vietnam Wall in Washington, D.C., we honor the 11 Foothillers who lost their lives and who are remembered in the GHS Museum's War Memorial with a collage of their yearbook photos as well as rubbings of their names from the wall.

One of them is Glenn Luhnow, Class of 1963.  In 2021 his wife Sandra donated to the museum Glenn’s Purple Heart, Bronze Star, senior photograph, army photograph, Vietnam Service Medal, and the letter from the White House signed by President Lyndon Johnson notifying Sandra of his death in Vietnam on October 14, 1967.

Sandra shared with us that “Glenn was killed  in Vietnam along with 6 other soldiers in his company… He received the Bronze Star for providing cover for his men and his actions reduced the number of causalities.”  He had been in Vietnam for 7 weeks and in the Army for 7 months.  He died at the age of 22.1 months.  (The average age of those in Vietnam was 22.1.)

Glenn’s personal story highlights the human toll each death has. His daughter Glenda was born 6 months after Glenn’s death;  Glenda’s son is named Glenn, both living testaments to their father and grandfather.

Each item in the War Memorial documents Foothillers whose contributions or experiences during periods of war remind us again and again of the human toll of war.

In the last month of the museum being open, we remind alumni who want to visit the campus as part of their class reunion that with advanced notice, your tour might also include the district office, where a walk on the 1922 hardwood floor in the hallways will rekindle many memories.  Please contact us to confirm a time and a date for your class.