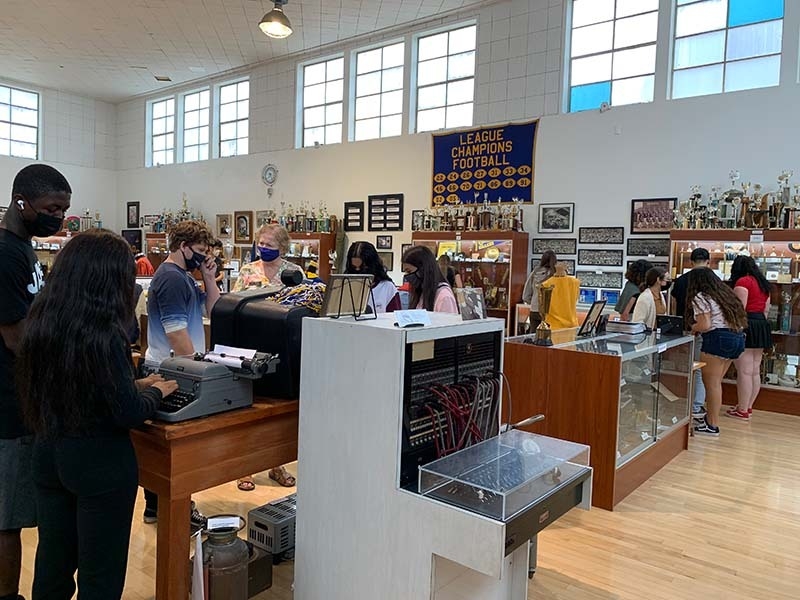 The Grossmont High School Museum’s Grand Opening was celebrated on October 17, 2008, but really, the museum’s roots trace back to the amazing teachers from the 1920s who began saving memorabilia, realizing that Grossmont was meant to be a special place.   Looking at today’s enlarged museum, the 1920s displays fill nearly one entire wall.  The large silver plated trophies are just one example of the pride that staff, students, and the community had for their school.

The genesis for a physical space on campus to display and house the memorabilia can be traced to 1996.  Preparing for the 75th Anniversary in 1996, Assistant Principal Bruce Davidson began gathering items on campus for display and asking for donations from alumni.  These items were showcased in a storage room for the district wide celebration.  Then, when Bruce returned to the classroom to teach AP Government, an old, unused trailer near his classroom housed the historic treasures.

In 2007, when we began creating on the GHS Museum, these items were then in boxes and shelves in the old bookroom.  Over the next 18 months, we “scrounged” the campus gathering items for our displays as well as display cases and contacting our alumni for donations of memorabilia.  Today, these items are displayed throughout the campus: in the museum itself, in the foyer of the New Gym, in the lobby of the PE Building, in the lobby of the school office, and in the district office.

One year ago, we began our move into our new space, into what was the 1950s Girls PE building dance room and hallway.  The continued support of Grossmont HS Principal Dan Barnes,  Facilities Manager Tom Fordham, and the GUHSD  Superintendent Theresa Kemper has made this possible.  Before our move, the new space was painted, the hardwood floors refinished, the outside doors replaced with security doors, and more. 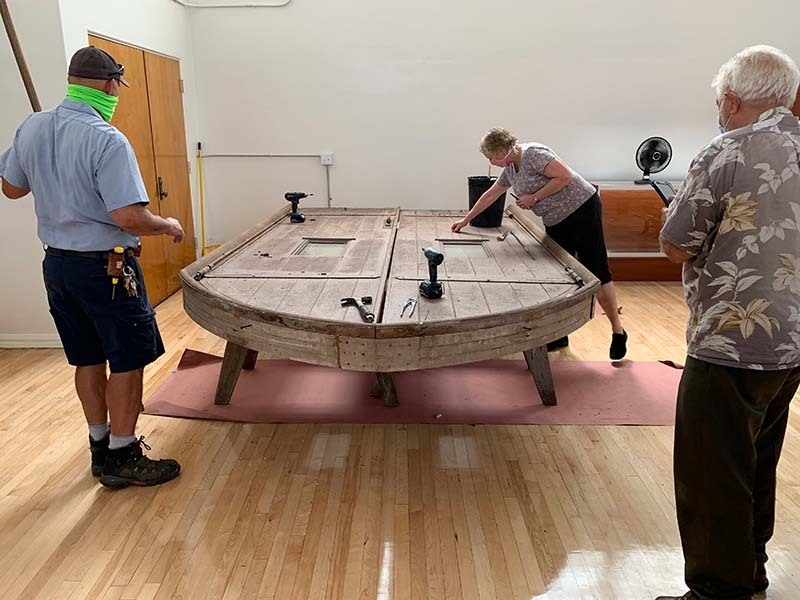 There were so many district maintenance employees who worked to create the new museum.  Tony Patton, district carpenter, has been amazing.  He hung the iconic 1922 double doors for us, with help from Rory Gooden and Carl Cable. Tony has hung all of the photos and other memorabilia on the walls and recently installed the French doors from the lobby of the “Castle” in the Spirit Hallway.  Next up for Tony is installing 1960s and 1970s surfboards, donated by Tom Bloomer, Class of 1967.  Whatever we ask, Tony finds a way to make it happen.

The district locksmiths Gary Hoke and Marcus Benefield made the original inside double doors operational, proudly sharing with us the 1918, 1919, 1920 patents on the internal workings of the locks, which they rescued for us.  The district glazer Dave Henderson replaced our broken or missing showcase shelves.  The district plumber Carlos Gomez helped us as we modernized the bathroom, making it handicapped accessible and more.

We thank Eddie Ramos, Refugio Magana, and Sal Samaniego and the evening custodial staff for moving the items too heavy for us, including 5 large showcases, 4 small showcases, a switchboard, tables, benches, 3 filing cabinets, and more.  Whatever we needed done, they “stepped up” in every way.

The oak bookcases and storage shelving were created and installed by Dave and Matt Vellone of Vellone Woodworking and funded by Bill Woolman, Class of 1962.  Greg Baer, Class of 1973, refinished twelve 1930s-1950s oak chairs, two 1930s oak teacher desks, and three 1920s and 1930s worktables and painted the bathroom for us. 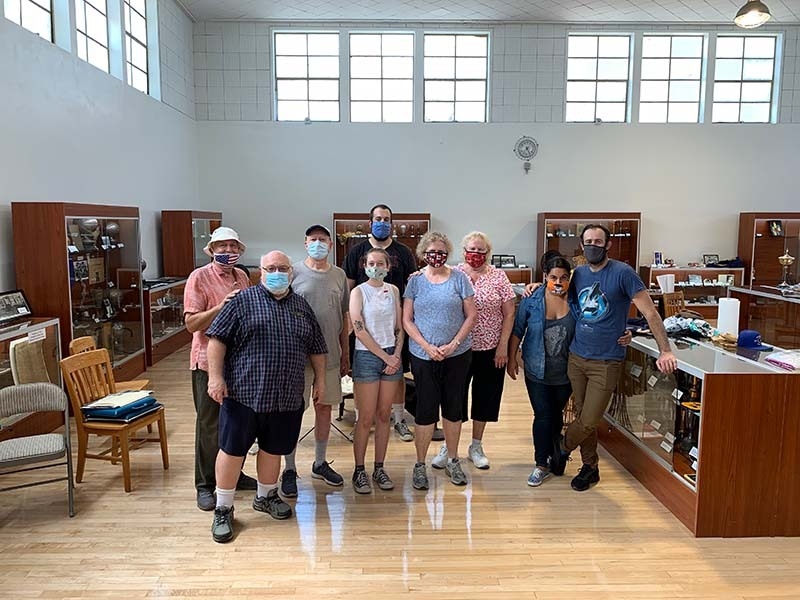 Once we began the move, there were several alumni and family members who were our invaluable “Worker Bees”, who spent a year packing and physically moving boxes of memorabilia from the old museum and our two storage rooms and then setting up the new displays:  Jerry Botts, Museum Volunteer, Class of 1970, and his granddaughter Serena Thornton; Bill Woolman, Class of 1962; our nephew Matt Vellone; our niece and nephew Kijan and Kyle Baer; Paul Miller, Alumni Director, Class of 1966; and our sister Yvonne Baer Vellone, Class of 1975.

All of these wonderful people again and again remind us of the love for the Grossmont HS shown by the Grossmont staff, alumni, and community over the past 100 years and today.

For more information, visit our website at foothillermuseum.com or contact us at or 619-668-6140.  Masks are required indoors on campus when students are present and always indoors for the unvaccinated.