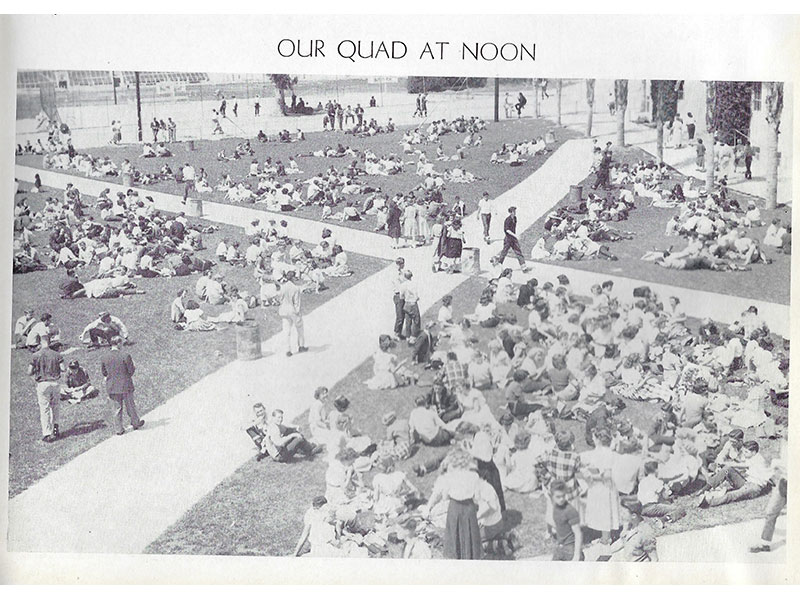 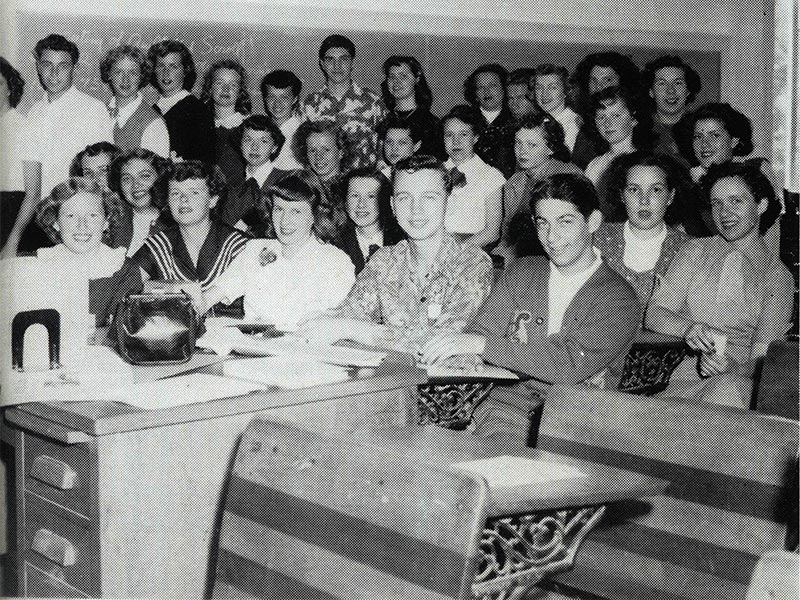 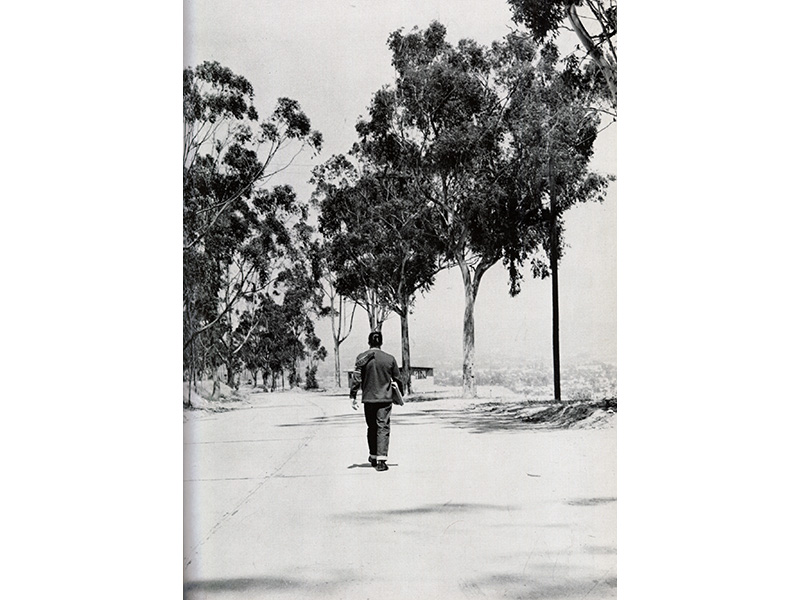 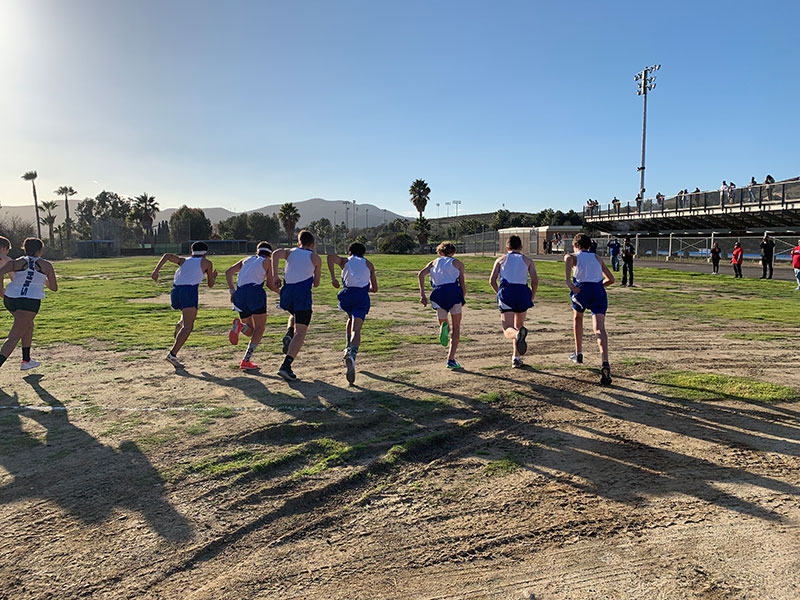 And They're Off! 2021 Cross Country Team in Their First Meet at West Hills

The 1950s Foothill Echoes, the student newspaper, reflects Foothiller campus life during that decade as well as the impact of a changing society. In the January 11, 1950 Foothill Echoes, the column “Featuring Foothillers” begins “Ellen Wessel, 18 year old senior, is called Lena by her mother.  She is 5 foot 1 inch, has brown hair and blue-gray eyes, and plans to be a dental assistant.  While eating tacos and drinking root beer, Ellen likes to listen to “Lovely Bunch of Coconuts” by Danny Kaye and read “Seventeen”.  Ray Milland and June Allyson are her favorite movie stars and Earl Peck is her one and only.  “’My most embarrassing experience”, blushes Ellen, was once when Tad Geiger asked me what held up my strapless sundress.’”

The October 10th, 1951 first page article “Explosive Noises Are Chemists, Not Russia” reminds us of the Cold War fear that gripped the nation after World War II. “Grossmont students, who, last week, thought the Russians were attacking, don’t need to worry any more. The explosions they heard were coming from the chemistry lab where, under direction of Mr. Daggs, head of the chemistry and physics department, students were generating small quantities of hydrogen.

Mr. Daggs said: “I’m only using the explosions to punctuate my remarks so they will be more clearly imprinted on the students’ minds.”

Mr. Daggs insists that the fact the noise woke up students who were catching a little extra shuteye in class, was only secondary.”

(In February of this year, adhering to COVID guidelines, Grossmont High School athletic teams began district competition.  Reminding us of the historic nature of all of GHS’s athletic programs, the 2021 Boys Cross Country team in its first meet on February 12th was victorious over West Hills.)

The April 6, 1953 student editorial by Leyla Tonness entitled “Foothiller Memories” begins “From its little site in Lakeside as a union high school, Grossmont moved to the “hill with the great white “G”.  1922 was the year.  Since then, each year has stood for the changes which are Grossmont’s memories today.

Back in the days when uniforms were in style, there was a single building, where now stand nine.  The auditorium was from the note rack that stands in the main hall to the far end of that hall and all the rooms on each side.  And there was a balcony too, where upstairs, frosh now toil over their first high school English papers.  Music and drama classes met, in turn, in that auditorium, as they had no rooms of their own.

Perhaps the most loved chapter of the past is the “miniature fountain” in the patio.  Many a scared freshman was “dunked” in that pond on initiation day.”

The March 15th, 1954 article “Mashin Has Only Champs” by Brian Viets documents what made Coach Mashin such a great coach.  Despite his basketball teams winning 80 percent of their games, his baseball teams winning three So. Cal. Championships, his trackmen winning 85% of their meets, according to Coach Mashin, “The best team he ever coached was a football team that didn’t win a single league game.  A week before school was to start, he came to school for a practice scrimmage, only to find that nine of his starting lineup had enlisted in the Army.  Although they didn’t win any games, they tried hard in every contest.  That’s why he considers them the best team he coached.  They tried.”

Finally, in the May 10, 1955 Foothill Echoes article “Frank Zappa Wins Poster Contest…”, “Frank Zappa, 9th grade, submitted the winning poster to the annual poster contest held by the California Division of Forestry, April 13.  There were 399 entries from 30 schools….An oil painting was donated by the Citizens Study Group to Frank Zappa for his winning entry.”  During his one year at Grossmont High School, Zappa’s artistic achievement foreshadowed his future success as a singer, songwriter, multi-instrumentalist, and more.

These 1950s Foothiller voices remind us of our own years as Foothillers, a timeless legacy.

In honor of our historic 100 Years of Excellence Celebration, the GHS Educational Foundation is sponsoring a scholarship fundraising program. $100 for 100 Years donors will have their names,  their families', or their businesses’ names engraved on 2x4 inch gray tiles, which will be displayed on a wall near the front of the school.

To order your tile, visit https://donationbricks.com/ghs100yearscholarships.  Or write a check payable to GHS Educational Foundation and mail to Connie and Lynn Baer, 5990 Avenorra Dr., La Mesa, CA 91942.  On the check memo, please indicate "scholarship fund" and include the text of your tile with your check (up to 3 lines, 20 spaces each).

Also, if you would like to order a GHS 100th Anniversary commemorative ornament, facemask, t shirt, hoodie, and more, please visit foothillerfoundation.com and download the 100th Anniversary Newsletter on the home page and make your purchases.

Due to the coronavirus restrictions,  the GHS Museum is currently closed, but we are checking our emails at and our phone messages at 619-668-6140.