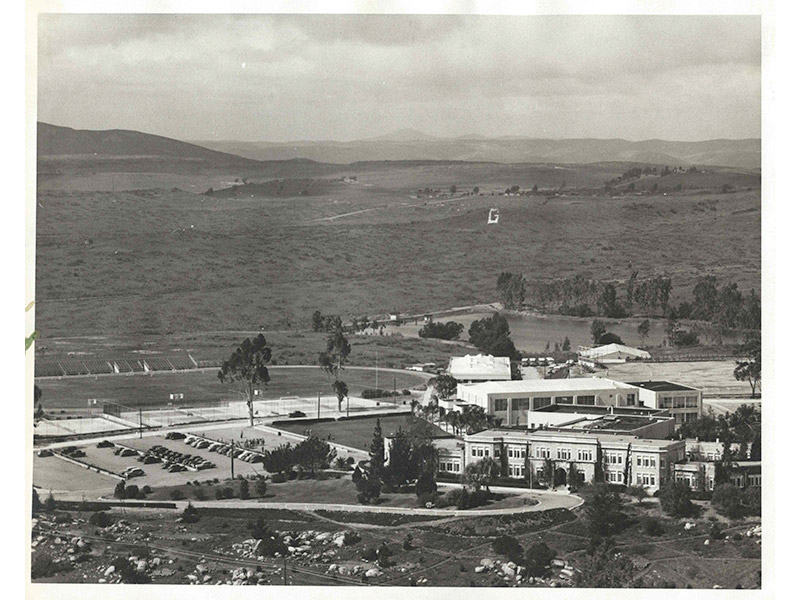 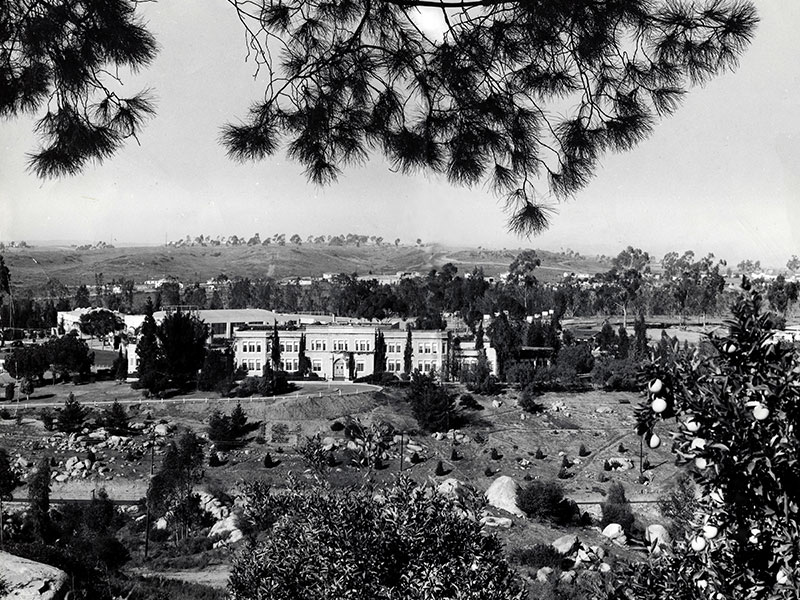 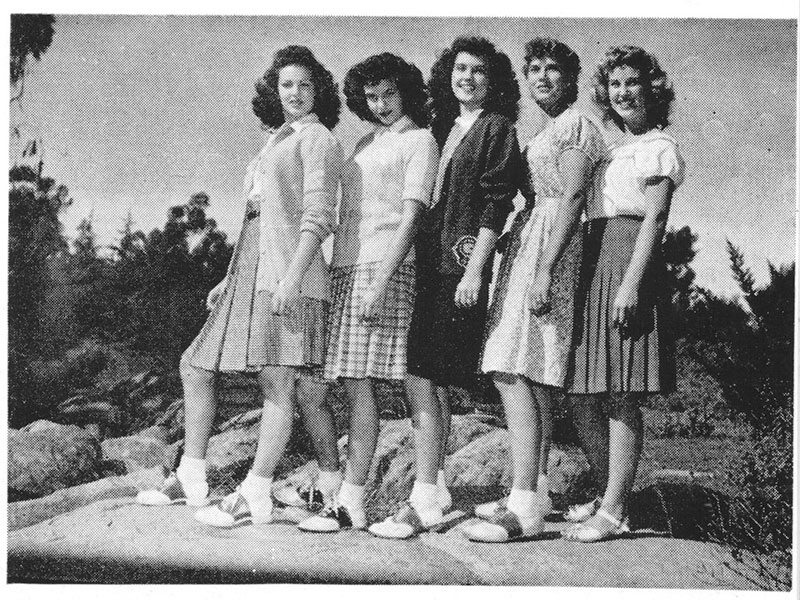 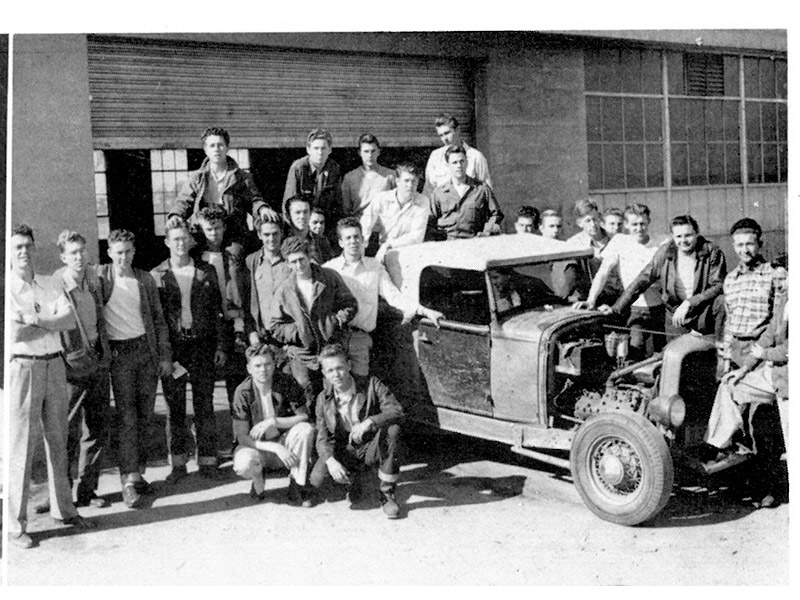 Throughout the 1940s Foothill Echoes, the student newspaper articles reveal the shifting emotions of Foothillers as they faced never seen before challenges. September 10, 1940, in the column “Pick-Ups” by Ben, the students’ lightheartedness is expressed in jokes such as this one: Coach Mashin- “Have any of you boys taken a shower?” Jerry Kibbey (Freshman) - “No, is there one missing?”

A year later, the October 14, 1941, column, “Letting off Steam” by the Editor (Bob Nichols) “It’s a Record” begins “Grossmont is keeping right in the swing this year. Not only winning its football games and keeping astride with the latest fashions, the school has taken to the ultra-modern “Platter Dances” - dance a la phonograph. Boy what a line up! Kay Kyser, Glenn Miller, Artie Shaw, Freddy Martin, Benny Goodman, Tommy Dorsey … where dancers sway with Sammy Kaye. Yessir! Nearly every noon in the Quad. Let’s keep it up.”

Reality becomes inescapable in the January 21, 1942, column “I Saw Pearl Harbor Bombed;  Gael Keene Tells of Oahu Escape”: “I was there when the Japanese bombed Pearl Harbor.” This statement was made by Gael Keene, newly enrolled student at Grossmont, who recently moved from Oahu. “The crash of bombs, the screaming of planes fighting high in the sky, the rolling roar of heavy artillery, and the wail of the fire sirens rudely awakened me on that memorable Sunday morning ... Rushing from the house, I gazed down on a once peaceful Pearl Harbor. The bay was now almost hidden from view by the thick clouds of billowing smoke from the flaming USS Arizona.”

The article mentions that “Killed in action in the Pearl Harbor raid of Sunday December 7, were Howard Carter, Class of ‘36; Frank Remick, class of 37; Edward Estrada and Rowland Smith, class of ’39. (In a later issue of the Echoes, Eddy was noted to be “still alive and kicking. “Lemme at ‘em” is the commentary of this pseudo ghost.”)

Foothillers’ wartime patriotism in shown in the January 20, 1943 front page with a large drawing of Uncle Sam rolling up his sleeves and the headline, “We’ve been in business since 1776 an’ we intend to stay”! The article begins, “For 166 years free Americans have lived together … during this time, we have established traditions and ideals that have grown with us, and become imbedded in the very soil of our America.

Now we are fighting to preserve these beliefs that are fundamental to the nature of freedom loving people of every nation and creed. To back up this statement the Foothill Echoes editorial staff, in conjunction with the Bond Selling committee, is making plans for a revolutionary Bond Campaign.” A subsequent issue publicizes one fundraising effort, a new bond and stamp campaign “Be a ‘Bombardier” with the minimum goal of every student selling or buying at least one war bond with honorary military titles given to students according to their bond selling success.

The April 2, 1945, Echoes sports headline proclaims, “Grossmont 23, Ohio State 21, In Rose Bowl Game.”  It continues “Roaring Crowd Witnesses Thriller As Grossmont Scores in Last Second”. The team finished the season undefeated after playing opponents such as Washington, Navy, Alabama, U.S.C., and Army. The article ends, “Hundreds of loyal Grossmont students carried four fearless Foothillers off of the gridiron after their heroic efforts during the game.” Yes, it is an April Fool’s Day column.

The March 2, 1948 column “Your Opinion!” begins “The crowded conditions of Grossmont’s halls tend to make them very noisy, as most of you realize. Therefore, this week we are asking “What can be done to alleviate this situation?” (A school built for 800, now has over 2000 students.) As you might imagine, humor pervaded the responses:

Mickey McGuire-Junior: “Have a seven-day weekend.”

Marvin Goodman-Senior: “Kick the freshmen out!”

Charles Banks-Junior: “Walk down the halls carrying a pitchfork.”

The GHS Museum’s collection of bound newspapers is a priceless “treasure trove” of memories and of history. We sincerely thank the newspaper advisors who had the foresight to preserve them as documents of Foothiller life.

In honor of our historic 100 Years of Excellence Celebration, the GHS Educational Foundation is sponsoring a scholarship fundraising program. $100 for 100 Years donors will have their names,  their families', or their businesses’ names engraved on 2x4 inch gray tiles, which will be displayed on a wall near the front of the school.

To order your tile, visit https://donationbricks.com/ghs100yearscholarships. Or write a check payable to GHS Educational Foundation and mail to Connie and Lynn Baer, 5990 Avenorra Dr., La Mesa, CA 91942. On the check memo, please indicate "scholarship fund" and include the text of your tile with your check (up to 3 lines, 20 spaces each).

Also, if you would like to order a GHS 100th Anniversary commemorative ornament, facemask, t shirt, hoodie, and more, please visit foothillerfoundation.com and download the 100th Anniversary Newsletter on the home page and make your purchases.

Due to the coronavirus restrictions, the GHS Museum is currently closed, but we are checking our emails at and our phone messages at 619-668-6140.