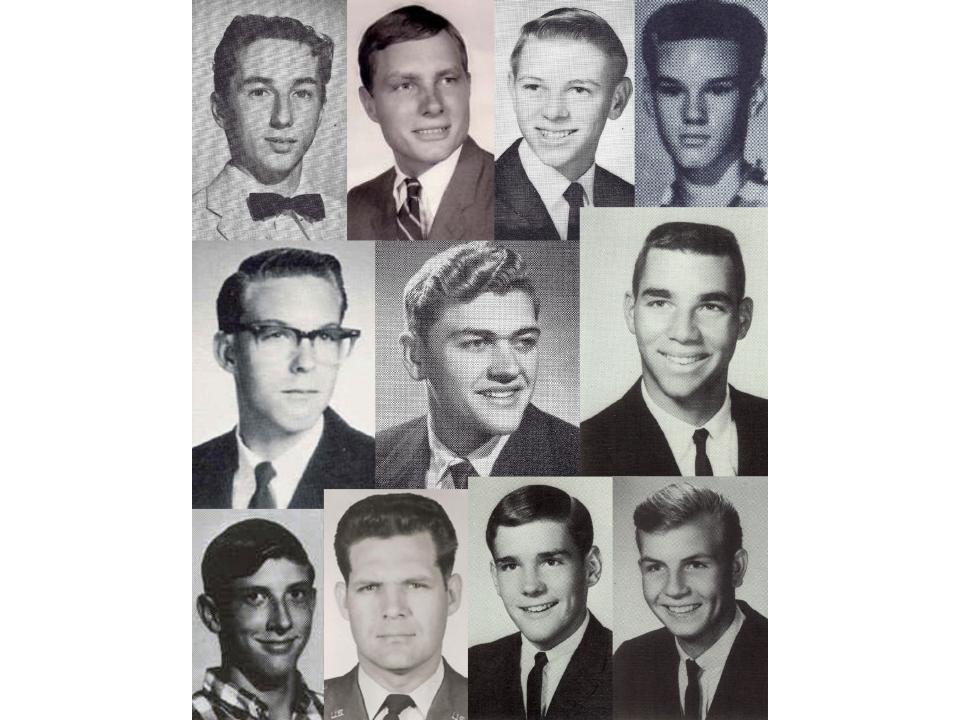 More than 60 years ago, a war began that created a cultural divide in the United States. Today, a simple, yet powerful, national memorial quietly celebrates the men who, whether they were drafted or volunteered for military service, sacrificed their lives in service to their county.  On Memorial Day 2019, we would like to recognize Foothillers who are among this group.

The black granite Vietnam Veterans Memorial Wall chronologically lists the more than 58,000 servicemen and women who lost their lives in Vietnam.  Hanging on the wall in the GHS Museum War Memorial display are the framed rubbings of the names of the 11 Foothillers who died in Vietnam. (We thank GHS alumni Luther Benning, Class of 1964, Craig Benning, Class of 1968, and Bill Woolman, Class of 1962, for making this possible. To request a rubbing of a name yourself, please visit https://donate.vvmf.org/page/signup/request-a-name-rubbing).

The loss of classmates, friends, and relatives leaves a lifelong wound. Over the past few years, many people have shared their memories with us.  In 2016, AP U.S. History Teacher Don Ginn assigned his students to research the lives of those who have died in wars from WWII to the Middle East Conflicts.  Some of these remembrances are from the student reports and some were given directly to the GHS Museum.

Gary Gene Wright, Class of 1949, graduated from SDSU in 1953. Gary enlisted in the Air Force in 1955; his tour of duty in Vietnam began in January 1967.  In 1974, while flying on an unarmed reconnaissance mission over North Vietnam, his plane was shot down in the Than Hoa Province.  He and his co-pilot were declared missing in action. Despite the hope that he was a prisoner of war, Gary never returned; for decades his family tried to discover whether he died in the crash or was taken a prisoner of war.

After 12 years of service in the Air Force and only seven months in Vietnam,  Aquilla Friend Britt, Class of 1953,was killed during a crash on land. Mel Scott, Class of 1952, friend of Aquilla, remembers that “Aquilla had his goal set to be a jet pilot from his freshman year at Grossmont. His focus was on learning to fly and everything there was to learn about aviation.” Tragically, he died in a landing.

After graduating from college with a degree in psychology, David Christian, Class of 1958, enlisted in 1962. Three years later, after taking off from the Midway on June 2, 1965, his attack jet was hit by anti-aircraft fire and plunged to earth near the Tonkin Gulf shoreline. In 1986, the Vietnamese government returned his remains. In their report, the students reflected that “Researching David was stressful to the end. To read about his hopes and dreams for when he came home has given us a more human perspective to the war.”

After training at Camp Lejeune and Camp Pendleton, William Fowler was sent to Vietnam in February 1969; he died 4 months later on June 19, 1969, ambushed while crossing a rice paddy and dying as a result of his injuries. He wanted to be buried where he died, but due to military restriction, William is buried in Okinawa, Japan.

Paul Rose, Class of 1961, began his tour of duty in the Army on September 9,1969, and died six months later in Binh Long, South Vietnam, as a result of hostile ground fire. During high school, Paul’s ironic sense of humor was evident in the quote he used beside his senior picture in the yearbook: “Think! Maybe we can dodge this work.”

Glenn Eugene Luhnow, Class of 1963, was drafted in 1966. After being in Vietnam only six weeks as an Army machine gunner for Company D, he was killed in action along with seven other men. His wife was notified in person and by telegram that he died in an ambush during a search and destroy mission. Every ten years, when his wife and daughter visit the Vietnam Wall, they read the names of all seven of the men who died with Glenn.

The GHS Class of 1965 lost three classmates in Vietnam.  Recently Mike Di Napoli’s best friend in Vietnam contacted us wanting to talk to Mike’s relatives to share with them his memories of Mike.  He was with Mike when coming out of the mess hall Mike was shot by snipers; he died instantly. For 50 years his friend has struggled with the grief and the question of “Why Mike and not me?”

After four years in the Army, Craig Haberlein was sent to Vietnam.  Four months later, he died from complications from malaria. Foothiller Deanna Sampson remembers Craig as a high school friend. “Since Craig knew it wouldn’t take much for me to laugh, he always tried to get me to cause a disturbance in class….I often wonder what he would have made of his life.” Over the years, Deanna has felt the loss of Craig’s friendship.

John Sullivan’s Naval tour of duty in Vietnam began on November 20, 1968; three months later on February 25, 1969, he died. Mark Houston, Class of 1966, remembers him: “John had a wonderful kindness that brought out the best in me…In Vietnam, John was US Navy Hospital Corpsman, as I was.  Unfortunately, John was tending to wounded Marines when the Viet Cong breached the wire and lobbed a hand grenade at him and he was killed by the shrapnel.”

David Hickman, Class of 1966, who served in the Marine Corps,was killed by small arms in May 1967, less than a year after graduating from Grossmont. Classmate Thomas Lahart recalls that “David and his unit were taking a hill in De Nang when his buddy got shot. David ran over to help and was killed.”

Kenneth Anderson’s tour of duty in Vietnam began April 3, 1969.  On June 23, 1969, Kenneth died in Dinh Tuong Province. His sister Karen Anderson, Class of 1964, recalls, “Ken joined the military at the age of 16 because he wanted our father to be proud of him.  After three years in Germany, Ken reenlisted and was sent to Vietnam.  His passing was devastating to me and my family. He was not supposed to go to Vietnam since he was the only son in the family…I was very angry about it.”

The tragic impact of the Vietnam Conflict is on display in the Museum through two POW bracelets honoring and remembering two of the many who were never found.  Also, thanks to Mark Houston, we have shadow box displays honoring two of the 11 Foothillers lost in Vietnam.

For a graphic glimpse of the toll of this conflict on Americans, visit the digital June 27, 1969 issue of Lifemagazine, which consists entirely of pages of the haunting images of the 242 men who were killed in one week in Vietnam: http://time.com/3485726/faces-of-the-american-dead-in-vietnam-one-weeks-toll-june-1969/

To see our War Memorial honoring those who served and those who died or to learn more about Foothillers past and present, visit the Museum