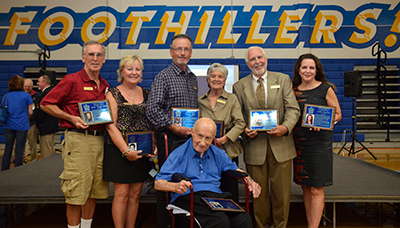 After graduating, Connie Baer returned to join her father inteaching at Grossmont in the 1970’s, quickly developing a strongreputation for skill, professionalism, and dedication.

Connie taught English at Grossmont for most of her overthirty years in the historic “Old Main” building, providing aleadership that has left an indelible mark on thousands ofstudents and teachers.

Soon after the 2008 opening of the GHS Museum, Bill Woolman visited the Museum. From that moment, Bill has worked to improve Grossmont High School.  When his class celebrated their 50th Anniversary in 2012, he encouraged them to donate their reunion proceeds to the Museum to purchase a laptop.  Then, Bill personally purchased a printer, paper, and toner as well, the kind of generosity that typifies him.

Bill’s donations are numerous.  He became one of the first Foothiller Founders, purchasing two tiles to support our GHS Endowment Fund.  His yearly donations have allowed us to have the GHS Alumni website, which has become an invaluable resource for us to communicate with alumni. Some of Bill’s other donations have enabled us to restore the transplanted historic ivy and the 1960 roses, to fund a bronze plaque dedicating the Discus Field to Marlin Baer, to create the Spirit Displays in the New Gym, and to restore the Big G on the Hill. In 2012, Bill donated the funds to create a monument in front of the Humanities Building celebrating Grossmont, proclaiming “Foothillers Forever”, with plans for another monument at the front of the campus.

Bill Woolman has endeared himself to students, staff, community, and alumni by his desire to “make a difference” at Grossmont High School.  He has enriched the culture of the school in countless ways and has become a dear friend to all Foothillers.

Associated Press Photographer Steve Starr received a Pulitizer Prize for Spot News Photography for his photograph of Afro-American Society (AAS) protesters leaving Willard Straight Hall at Cornell University in 1969. They were protesting Cornell's perceived racism and occupied Straight Hall on Parents Day weekend, fighting with other students. After two days, following negotiations with Cornell officials, the AAS students emerged from Straight Hall carrying rifles and wearing bandoleers of ammunition. Their image appeared in newspapers across the country and on the cover of Newsweek magazine under the headline, "Universities under the Gun."

After attending Antioch College in Ohio and Bethel College in Minnesota, Steve attended San Jose State, graduating in 1967 with a degree in journalism. In 1983, he was honored at Grossmont’s graduation, where his speech explored the topic of the unpredictability and inevitability of the future.

Michael Madigan returned to the public sector in 1999 after spending 21 years with Pardee Construction Company, retiring as the Senior Vice President in charge of Pardee Development Coordination for planned communities including Sabre Springs, Mira Mesa, and Ocean View Hills. In 1999, he was asked by San Diego Mayor Susan Golding to lead the massive 26-block redevelopment project in the East Village of San Diego City, which included the new home for the San Diego Padres, PETCO Park, and the revitalization of the surrounding residential and commercial area.

Prior to this, for five years, Mike served as Chief of Policy to Mayor Pete Wilson, with direct responsibility to the Mayor for the City’s Growth Management Plan and the redevelopment of downtown San Diego. He also served as the first Staff Director of the Metropolitan Transit Development Board, builder of San Diego’s light rail system. In addition, for 20 years Mike served as Director of the San Diego County Water Authority, having been appointed to the Board by 5 successive mayors of San Diego and also served for 10 years as a Director of the Metropolitan Water District of Southern California.

Mike has demonstrated a commitment and dedication to the San Diego community through his leadership of many non-profit organizations including the Rady Children’s Hospital, the San Diego Library Commission, and the Vietnam Veterans of San Diego Vision Committee, overseeing expansion of a facility to provide treatment to homeless veterans suffering from PTSD, alcohol and/or drug addictions.

In 1950, a flip of a coin began a journey that would lead Seokjin Choi from Korea to Grossmont High School and to a new life as James Choi Spackman, the adopted son of U.S. Marine Sergeant Clarence Spackman. After arriving at Grossmont at the age of 15 and being placed in tenth grade, James quickly distinguished himself as a diligent student with the encouragement of English teacher George Gross and others. As a senior, James was elected ASB President, and upon graduation, received a scholarship to Harvard College and then entered Columbia University for graduate work.

After serving in the U.S. Air Force for 4 years and then later in the Korean army for 2 years, James began a 25-year relationship with banking in Korea. In 1987 he joined Prudential Financial, and by 1993 was the first President of Prudential Life Insurance Company of Korea. From 2000-2002, James served as president of International Insurance Group’s Asia Region and from 2002-2005 as both president and CEO.

James’ life exemplifies what a person can achieve through intelligence, perseverance, hard work, and the lucky flip of a coin.

Timothy Miller has spent four decades training surgeons at the David Geffen School of Medicine at UCLA, where he was Chief of the Division of Plastic and Reconstructive Surgery. Dr. Miller has published over one hundred scholarly articles and more than forty textbook chapters, as well as a novel Practice to Deceive, a Literary Guild selection.

Dr. Miller served in Vietnam from 1965-1966, where he was exposed to the wounds and burns sustained from IED’s as well as the experience of war.    There, he was awarded the Bronze Star and the Vietnam Special Forces Parachute Wings.

In 2007, Dr. Miller was the co-founder and first Surgical Director of Operation Mend-a unique program whose purpose is to address the comprehensive needs of returning soldiers who have suffered severely disfiguring facial wounds in Iraq and Afghanistan. Dr. Miller has performed more than 230 reconstructive surgical procedures through Operations Mend, whose motto is “It is the divine right of man to appear human” ---a 1550 quote, etched in a chapel near the University of Bologna.

As a professor emeritus, Dr. Miller continues to perform surgeries for Operation Mend patients.  Dr. Miller summarized these efforts by quoting Staff Sergeant Octavio Sanchez, USMC, who said, “Thank you for what you did; you took everyone’s stares off me.”

This email address is being protected from spambots. You need JavaScript enabled to view it.
or Call 619-668-6140